The Vice President of .netBC, Brian Pidcock, baked a pie for Hai Wang and presented it to him at our regular meeting on Tuesday May 6, 2008. Here is a picture of both Hai Wai and Brian Pidcock taken by a mobile phone: 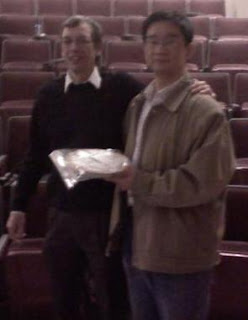 Unfortunately, our speaker Dana Epp did not show up at that meeting held at BCIT in Burnaby, BC. When I contacted him the next day he said that he forgot about it. In the five years of the existance of our user group we never experienced a no-show by a speaker. I would like to apologize to those who attended for this unfortunate situation. John Bristowe of Microsoft Canada is sending me consolation gifts for those who came to this no-show meeting. These gifts will be delivered during our July 9, 2008 XNA event.
Posted by Medhat Elmasry at 11:16 PM