Although the current version of ASP.NET is 6.0, I discovered that the official MySQL EF Core driver for .NET 6.0, at this time, does not work very well. Therefore, I decided to write this article for ASP.NET 5.0 Core. The NuGet package is MySql.EntityFrameworkCore Nuget located at https://www.nuget.org/packages/MySql.EntityFrameworkCore/.

Instead of installing and running a MySQL instance on my computer, I will run MySQL in a docker container for simplicity.

This article assumes the following:

Setting up the MySQL 8.0.0 container

In a working directory, run the following command to create an ASP.NET MVC application named MySqlWeb using .NET 5.0:
dotnet new mvc -f net5.0 --auth individual -o MySqlWeb
This creates a web application that uses the SQLite database for individual authentication. Instead of SQLite, we will use MySQL instead.
Change directory to the newly created folder with:
cd MySqlWeb
Firstly, let us remove support for SQLite by removing the appropriate package with this command:
dotnet remove package Microsoft.EntityFrameworkCore.Sqlite
Next, let us add two packages that will provide us with MySQL support using the Connector/NET for Entity Framework driver:
dotnet add package Microsoft.EntityFrameworkCore.Design -v 5.0.14
dotnet add package MySql.EntityFrameworkCore -v 5.0.10
Replace the connection string value for DefaultConnection in appsettings.json to the following pertaining to our MySQL database:
server=localhost;database=library;user=root;port=3333;password=secret;SslMode=none;
Open Startup.cs in an editor and change 'options.UseSqlite' to 'options.UseMySQL' around line 31.

Now, let us test our web app and see whether or not it is able to talk to the containerized MySQL database server.
Run the web application with the following terminal command:
dotnet run
If all goes well, you will see a message that indicates that the web server is listening on port numbers 5000 and 5001 (SSL). Point your browser to https://localhost:5001. Click on the Register link on the top right-side. 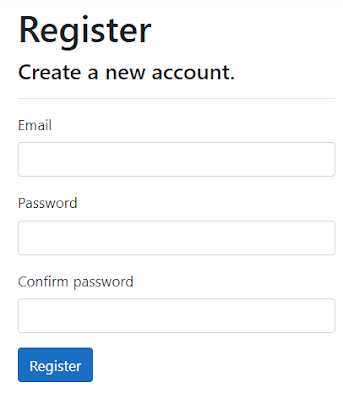 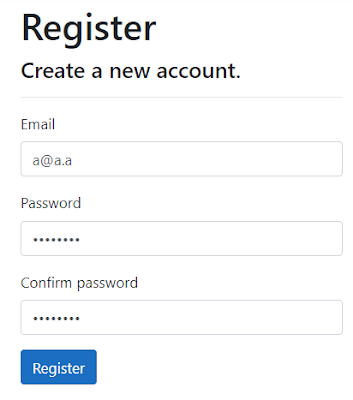 The website then displays the following page that requires that you confirm the email address:

Login with the email address and password that you registered with. You will see a welcome message in the top right-side indicating that you are logged-in.

This proves that your email and password was saved and that the connection to the MySQL database works as expected.
Happy coding.
Posted by Medhat Elmasry at 6:46 PM No comments:

You have a self contained web app that runs in a docker container and want to deploy it on a cloud service. I will show you how easy it is to deploy your docker image to Azure App Services. I will, as an example use a simple Node.js Express web app in this demonstration.

In a previous article, I created a Node.js Express app that persists data in SQLite. I will use this sample app i this article.
Clone the Node.js Express sample web app on GitHub by running the following command from a working directory in a terminal window on your computer:
git clone https://github.com/medhatelmasry/xpress-sqlite-chart
Change into the newly cloned directory with:
cd xpress-sqlite-chart
The application is a simple Node.js Express application that uses SQLite as a database. This will come as a surprise to most Node.js developers because MongoDB is the most commonly used database with Node.js. The reason I used SQLite in this case is because it does not need a database server and can run independently in a docker container. To experience what this web app does, run the following commands in the same folder:

This will display in the console:

Connected to the SQLite database.

Point your browser to http://localhost:3000/api/students and you will see the following output: 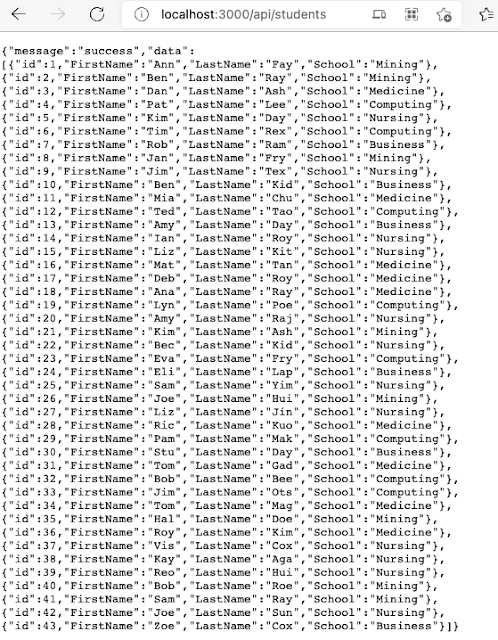 You can view a pie-chart summarizing the above information at http://localhost:3000/chart.html as shown below: 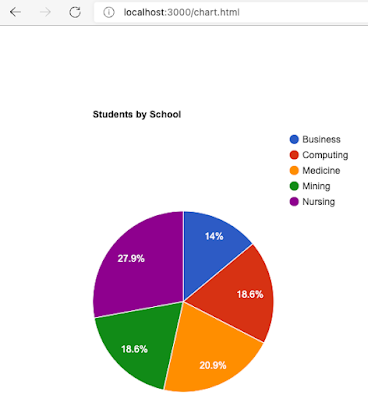 This data is being dynamically read from a SQLite database file named school.db located in the root of the web app.

Stop the Node.js app by hitting CTRL C on the keyboard.
Let us build a web app image and deploy it to docker hub.
We do not need to copy folder node_modules. Also, we should not copy school.db into the image because it is automatically created when the web app starts. Therefore, add a text file named .dockerignore with the following content:

I am hereby using snoopy a an example docker-hub username. Be sure to replace every instance of snoopy with your docker-hub user name.
The command to build a Docker image named bingo version 1.0.0 is:
docker build --tag snoopy/bingo:1.0.0 .
Note: Make sure you run the above command in the same folder as Dockerfile.
To ensure that you created an image named asp-bingo, type the following command:
docker images
You will see your newly created image in a list of Docker images:

Login into Azure by going to the portal at https://portal.azure.com. Click on "App Services" on the left-side hamburger menu: 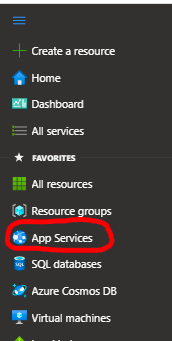 Add a new resource group and complete the remaining settings as shown below: 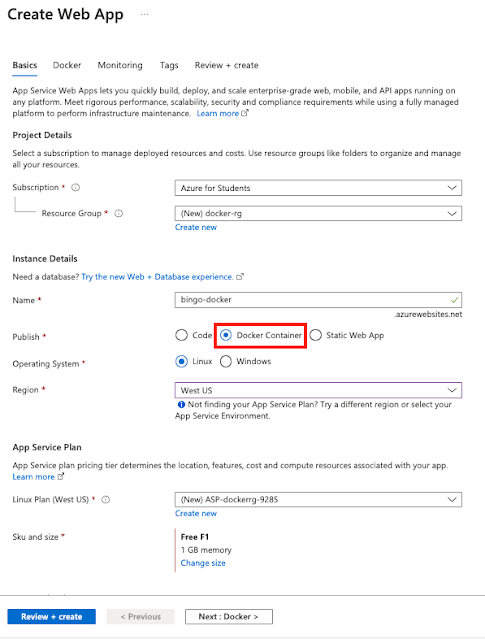 The most important setting you need for Publish is "Docker Container".
Click on the "Next : Docker >" button. On the next screen choose: 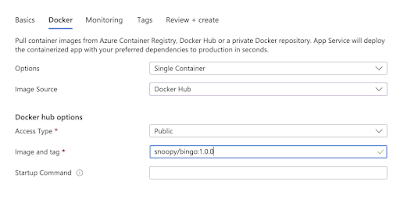 Click on Review + Create then click on Create. You will see a blue "Go to resource" button once the deployment is completed.

Click on "Go to resource". This takes you to the control page for your web app.

Click  the link on the top right-side as shown above. The web app should show in the browser.

If you want to see something more interesting, point to page /chart.html: 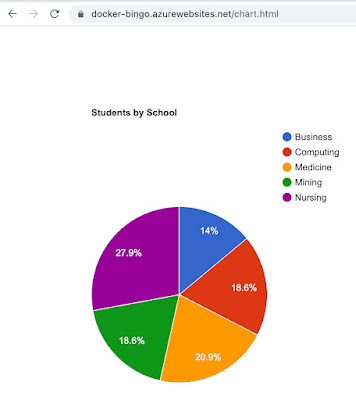 I trust that you have a good appreciation of how easy it is to deploy a containerized web app to the Azure App Services.

Posted by Medhat Elmasry at 8:57 PM No comments:

In this article, I will develop a Node.js Express application that imports data from a CSV file into a SQLite database and render a pie chart using Google Charts. The purpose of this post is to familiarize the reader with Node Express, importing a CSV file into SQLite and, subsequently, rendering a pie chart with the data.

SQLite is the most used database engine in the world. SQLite is built into all mobile phones and most computers. Even though it is not customary to use SQLite with MongoDB apps, it is worth exploring as this database engine is self-contained and does not need a database server.

The following is assumed about your environment:

Let us first create a skeleton template of a simple Node.js Express application. This application will focus of APIs, so there will be no need to use any view engines.

In a working directory, create a subdirectory named xpress-sqlite-chart for our new Node.js application with:

Let us initialize a new node app with:

Edit the package.json as follows:

1) Change the value for main: from index.js to server.js:

The resulting package.json will look like this, with changes highlighted:

We need to add some packages with the following npm command:

The three above packages are self-explanatory for those familiar with Node.js. 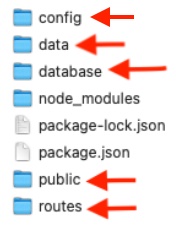 Inside the data folder, create a text file named students.csv with the following content:

In the config folder, add a file named index.js with the following content:

The above file serves as a configuration file that specifies the SQLite database name and the port number that will be used. As regards the port number, it takes the PORT environment variable, otherwise it defaults to 3000.
Add two files to the routes folder named index.js and students.js respectively.
The content of routes/index.js is as follows:

The above will display a JSON object {"message":"Ok"} when the use points his browser to endpoint /.
The content of routes/student.js is as follows:

The above code sets up an endpoint that displays a JSON array of some fixed sample data of students.
In the root folder of your application, create a file named server.js and add to it the following code:

What does the above code do?

Start the node app by issuing the following command in a terminal window at the root of your application:
nodemon
If you point your browser http://localhost:3000, you will see the following:

Pointing your browser to http://localhost:3000/api/students will reveal the following:

We now have a skeleton web app that we can build out towards our final product.

We will use the csvtojson package to import CSV data that resides in the data/students.csv file into SQLite.
Add a file named index.js to the database folder. Then, add the following code to database/index.js:

What does the above code do?

The above allows us to access the db database object defined in database/index.js.
Instead of hardcoding JSON data in the "/students" GET route, we can read data from the database, Therefore, replace the the router.get("/students .... code in router/students.js with the following:

We execute the SQL statement "SELECT * FROM students" to read contents of students table and return the data as an array of JSON objects.

Let's test our application. When you point your browser to http://localhost:3000/api/students, you will see a list of all the students in the database:

Also note the creation of a SQLite database file named school.db in the root of your web app.

Creating a chart of students by school

We will use the freely available Google Charts library to render a pie-chart illustrating number of students in every school. The starting point is to create a aggregation of the data. This will be done by adding the following additional /chart route to routes/students.js just under the existing /students route:

Point your browser to http://localhost:3000/api/chart and you will see a list of aggregate data as follows:

We can render this aggregate data into a pie chart. In the public folder, create a simple HTML file named chart.html with the following content:

Note that we are making a ajax get call to endpoint /api/chart in the $.ajax() jQuery call. Also, note that new google.visualization.PieChart() generates a pie chart. With Google Charts, you can generate a multitude of chart types including bar, geo, column, area, etc...
When you point your browser to http://localhost:3000/chart.html you will see the following pie-chart. 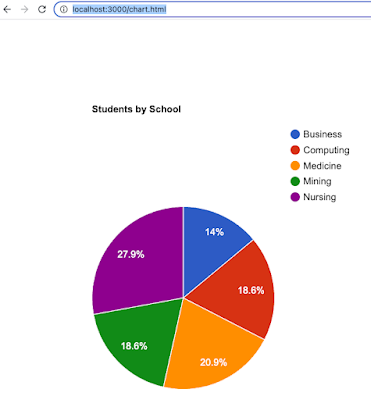 No surprise, 27.9% of students are doing nursing during this age of covid.

In public/chart.html, change the URL in "url: '/api/chart', to "http://localhost:3000/api/chart" so that we can run the chart.html page outside of the current web server.
From within the file system of desktop computer, double click on file public/chart.html. The page loads in a browser but appears blank. Visit the browser developer tools console tab. You will see an error that resembles the following:

This suggests that we have a CORS issue. What is CORS?

Cross-origin resource sharing (CORS) is a browser mechanism which enables controlled access to resources located outside of a given domain.

We need to enable CORS in our server app. This is done by adding the following code to server.js just before app.use("/", index); around line 15:

Now try double-clicking on public/chart.html (or refreshing the page) and you should see that it is working fine. 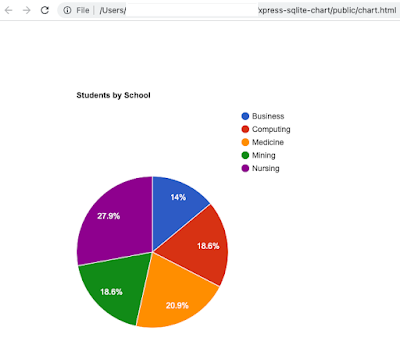 What have we learned in this tutorial?

Thanks for coming this far in this article. In my next article I will show you how you can take this app and turn it into a Docker image that can be pushed to Docker-Hub and, subsequently, hosted on Microsoft Azure.
Posted by Medhat Elmasry at 4:17 PM No comments: