Please go through my previous post before continuing with this tutorial.

We will generate the release version of the application by executing the following command from a terminal window in the root directory of your ASP.NET 2.0 project:

The above command instructs the dotnet utility to produce the release version of the application in the dist directory. This results in output similar to the following:

If you inspect the dist directory, you will see content similar to the following: 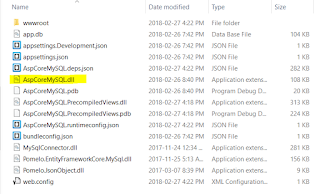 The highlighted file in the above screen capture is my main DLL file that is the entry point into the web application.

Let us run the release version of your application. To do this, change directory to the dist directory with the following terminal instruction:

You can then run your main DLL file. In my case, this file is AspCoreMySQL.dll. I executed the following command:

This generates an understandable error because the application is unable to connect to a database:

Application startup exception: MySql.Data.MySqlClient.MySqlException (0x80004005): Unable to connect to any of the specified MySQL hosts.

This gives us a good idea about what ASP.NET Core 2.0 artifacts need to be copied into a container. We shall simply copy contents of the dist directory into a Docker container that has the dotnet core 2.0 runtime.

return to the root directory of your project by typing the following in a terminal window:

We need to create a docker image that will contain the dotnet core 2.0 runtime. A suitable image for this purpose is: microsoft/aspnetcore:2-jessie

Create a text file named Dockerfile.mvc and add to it the following content:

Above are instructions to create a Docker image that will contain our ASP.NET Core 2.0 application. I describe each line below:

We will next compose a docker yml file that orchestrates the entire system which involves two containers: a MySQL database server container and a container that holds our application. In the root folder of your application, create a text file named docker-compose-aspnetcore-mysql.yml and add to it the following content:

Below is an explanation of what this file does.

Image mysql:8.0.0 will be used for the MySQL container.

A volume named datafiles is declared that will host MySQL data outside of the container. This ensures that even if the MySQL container is decommissioned, data will not be lost.

restart: always is so that if the container stops, it will be automatically restarted.

The root password will be secret when MySQL is configured. This is set by the MYSQL_ROOT_PASSWORD environment variable.

The container will be built using the instructions in the Dockerfile.aspnetcore2 file and the context used is the current directory.

depends_on indicated that the web app relies on the MySQL container (db) to properly function.


Port 80 in the mvc container is mapped to port 8888 on the host computer.

Just like in the db container, restart: always is so that if the container stops, it will be automatically restarted.

The environment variables needed by the web app are:

- DBHOST pointing to the MySQL service and
- ASPNETCORE_ENVIRONMENT set to Development more. In reality, you should change this to Production one you determine that your web app container works as expected.

To find out if this all works, go to a terminal window and run the following command:

Point your browser to http://localhost:8888/ and you should see the main web page. To ensure that the database works properly, register a user by clicking on the Register link in the top right corner.

In my case, I received confirmation that a user was indeed registered: 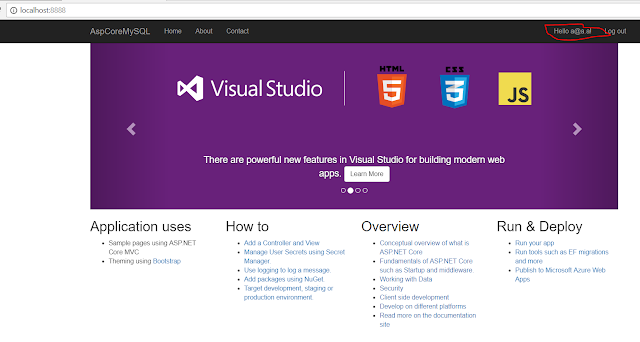 As you can see in the top-right corner, the user with email a@a.a has been successfully registered.

This opens up a whole new world for containerizing your ASP.NET Core 2.0 web applications.

Posted by Medhat Elmasry at 5:38 PM No comments:

Using MySQL database in a docker container with an ASP.NET Core 2.0 web app on your host computer

It is customary to develop ASP.NET Core 2.0 applications with either SQL Server or SQLite databases. How about if you want to use the popular MySQL database server? This article discussed one approach to making this possible by having your ASP.NET Core 2 development environment connect with MySQL running in a docker container.

This article assumes the following:

The first step is to create a working directory somewhere on your computer's hard drive. I did so by creating a folder named AspCoreMySQL with the following terminal command:

Thereafter, go into the new folder with:

We will create an ASP.NET Core 2.0 application that uses individual authentication with the following command:

To run the web application and see what it looks like, enter the following command:

You will see a message in the terminal window that resembles the following:

The above message indicates that the Kestrel web server is running and listening on port 5000. Start your browser and enter URL http://localhost:5000. You should see a page that looks like this: 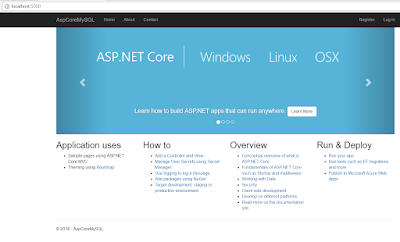 If you look into the root folder of the project, you will find a file named app.db. This is a SQLite database file. The web application that we scaffolded is configured to work with SQLite. We will change it so that it works with the popular MySQL database instead.

Close your browser and stop the web server in the terminal window by hitting CTRL + C.

We will be using an Entity Framework Core driver for MySQL named Pomelo. Add the Pomelo driver package with the following terminal command:

Let us configure our web application to use MySQL instead of SQLite. Open the Startup.cs file in your favorite editor and comment out (or delete) the following statement found in the ConfigureServices() method:

Replace the above code with the following:

We can instruct our application to automatically process any outstanding Entity Framework migrations. This is done by adding the following argument to the Configure() method in Startup.cs:

This means that our Configure() method will have the following signature:

Next, add the following code inside the Configure() method in Startup.cs right before
app.UseMvc:

This is all you need to do in order to change the database configuration of our application so that it uses MySQL instead of SQLite. There is, of course, something major that is missing I.E. we do not have a MySQL database server yet. Let us have a Docker container for our MySQL database server. Run the following command from a terminal window:

Here's what this command does:

-p 3306:3306 maps port 3306 in the container to port 3306 on the host machine
--name mysqldb names the container
-e MYSQL_ROOT_PASSWORD=secret sets the root password for the MySQL database server
-d runs container in background and prints container ID
mysql:8.0.0 Image MySQL version 8.0.0 from hub.docker.com will be used

If you do not already have the docker image for MySQL version 8.0.0, it will be downloaded. Thereafter, a container will be made from that image and will run in background mode. To prove that the container was indeed created from the image and is active, run this command:

Now, let us test our application and see whether or not is is able to talk to the containerized MySQL database server.

Run the web application with the following terminal command:

If all goes well, you will see a message that indicates that the web server is listening on port 5000. Point your browser to http://localhost:5000. The same web page will appear as before. Click on the Register link on the top right side. 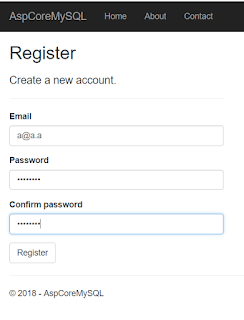 I entered an Email, Password and Confirm password then clicked on the Register button. I was then rewarded with the following confirmation that the credentials were saved in the MySQL database server: 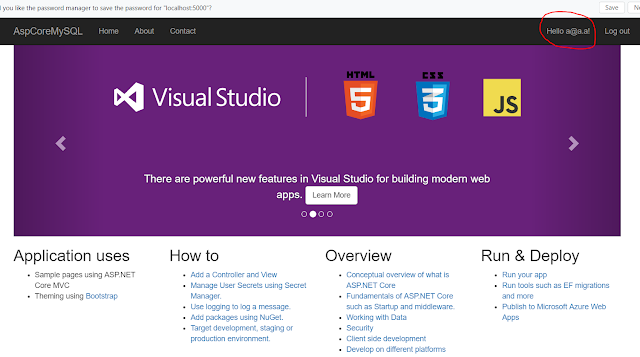 The message on the top right side confirmed that the user was saved and that communication between my ASP.NET Core 2.0 application and MySQL is working as expected.

In my next post I will demonstrate how we can also containerize our ASP.NET Core 2.0 web application.
Posted by Medhat Elmasry at 9:01 PM No comments:

Swagger is an API specification framework. It reminds me of WSDL in the SOAP days. In this article I will guide you in add Swagger documentation to an ASP.NET Core Web API app.

There are three components that we need to buckle-up in our Web API application. These are, not surprisingly, called Swashbuckle:
For starters, add package Swashbuckle to your project. This can be done in two ways:

1) If you are using Visual Studio 2017, execute the following command from the Package Manager Console:

2) From a terminal window in the main project folder, enter the following command:

Add the following using statement at the top of your Startup.cs file:

Next, add the Swagger generator to bottom of the ConfigureServices() method in Startup.cs:

Add the following two lines of code to the Cofigure() method in Startup.cs just before app.UseMvc():

NOTE: You can exclude the service generated by an API controller by annotating the controller class with: [ApiExplorerSettings(IgnoreApi = true)]

Run your application with CTRL + F5.

Point your browser to http://localhost:{port number}/swagger/v1/swagger.json and you will see a JSON document that describes the endpoints of your service.

You can also see the Swagger UI at URL http://localhost{port number}/swagger.

In the above example the API service is Studentapi. Your service will be under API V1. Click on it and you will see something similar to the following:

To test out GET, click on the first blue GET button and the section will expand describing to you the structure of your object: 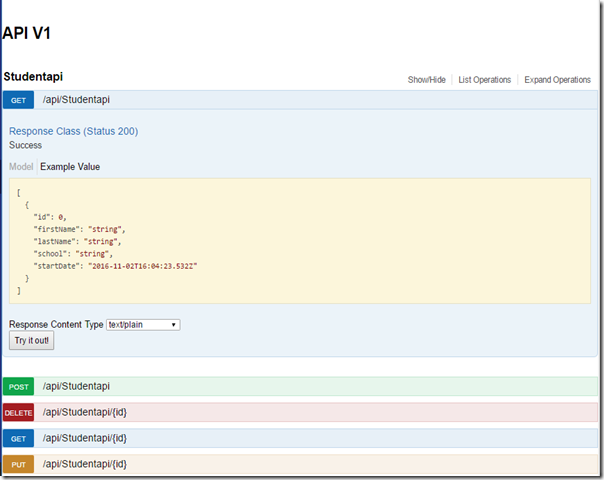 Click on the “Try it out!” button to view the data coming back from the service for all items in the collection: 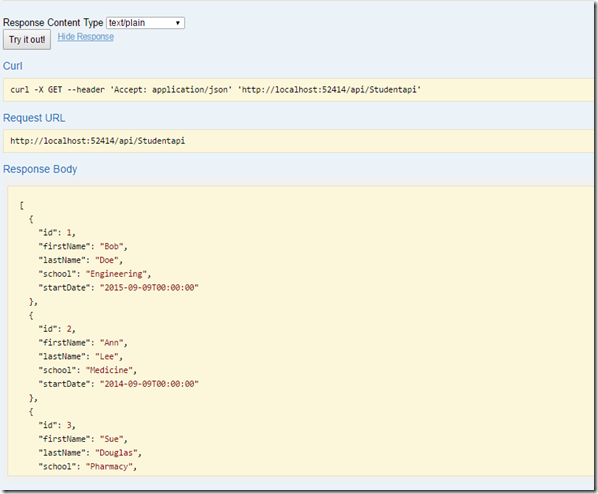 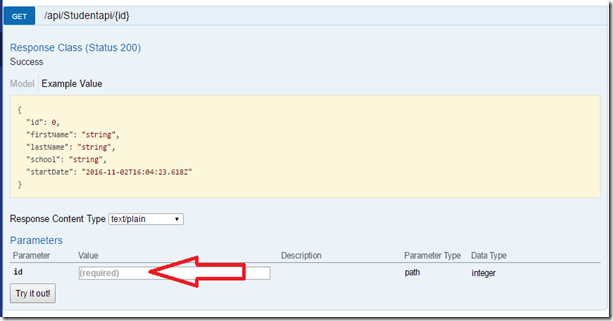 Enter a value for ‘id’ then click the “Try it out!” button. It should get for you the item for that id. 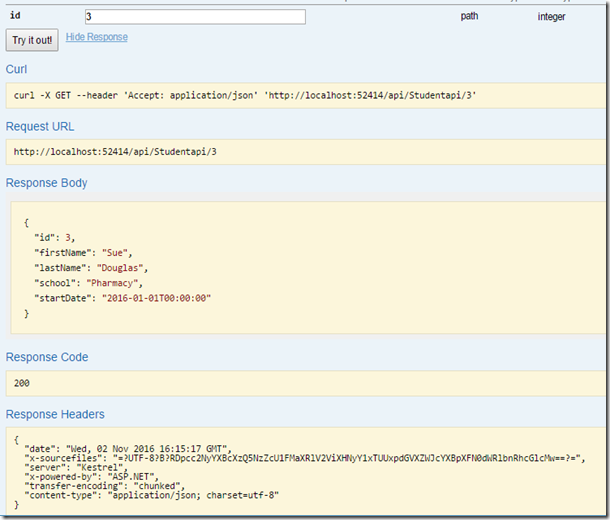 In a similar manner, go ahead and test out all the other POST, DELETE, and PUT buttons.

The official Swagger website at http://swagger.io/. You can generate a Swagger client for most programming languages at http://editor.swagger.io/.
Posted by Medhat Elmasry at 12:35 PM No comments: