Build .NET MAUI apps on macOS with VS Code

.NET Multi-platform App UI (.NET MAUI) is a cross-platform framework for creating native mobile and desktop apps with C# and XAML.It is the evolution of the Xamarin.Forms cross-platform framework. .NET MAUI Release Candidate 2 was made available recently on April 26, 2022. This means that the product is is supported by Microsoft for production apps.

I shall demonstrate how easy it is to get started with.NET MAUI on macOS. In order to follow on, you will need the following pre-requisites:

From within a terminal window on macOS, run the following command:

This should will show you the available .NET application templates for cross platform applications:

In today's exercise, we will create an app using the first maui template.

On the mac, you will need iOS 15.2 SDK (shipped with Xcode 13.2). If you have multiple versions of Xcode, you can choose a suitable version to be used with MAUI with:

sudo xcode-select -s /Applications/Xcode-beta.app/
Let us create a new MAUI app on macOS. In a terminal window, navigate to a suitable work directory, then run the following command to create a .NET MAUI app named 'maui2022':

The full set of .NET 6 TFMs (target framework monikers), including operating-specific ones, are: 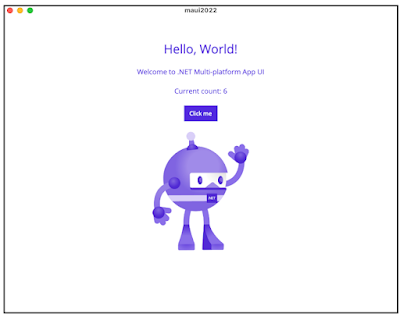 The actual macOS application will reside in the Debug/net6.0-maccatalyst/maccatalyst-x64 directory as shown below:

To run the sample app as an iOS application, we will use the net6.0-ios target framework moniker:
dotnet build -t:run -f net6.0-ios
The above opens the app in a default iOS simulator. If you want to target a specific simulator (say iPhone 11), start Xcode, then choose Window >> Devices and Simulators.

Right-click on your device of choice, then select “Copy Identifier”. 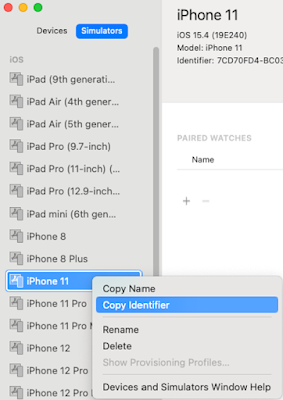 To run the sample app as an Android application, it is necessary to open an Android emulator. The easiest way to do so is to start Android Studio,  then start the AVD Manager.

After you create a virtual device (or emulator), start it by clicking on the green arrow. 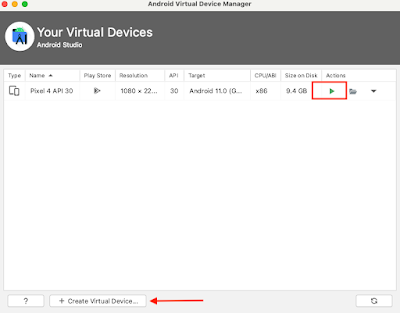 Once the emulator starts you can run the sample app in an Android environment.

Open the application workspace in VS Code, then open MainPage.xaml.cs in the editor. Change the statement on line 14 from "count++;" to "count += 10;" such that the count increments by 10 instead of 1. When you run the app in the Android emulator, you will see that it behaves as expected.

In this short journey we have learned how easy it is to run the same .NET MAUI app in macOS, iOS and Android. If you are on Windows, you can also run the same app on the Windows Operating System. Having come this far, try some simple changes to the app, like:
Happy .NET MAUI development.
Posted by Medhat Elmasry at 10:18 AM